The last poster of 2012 for us is a poster we feel has been a long time coming. Since our early days, we always saw a lot of amazing work on HoF posters from too many artists to name. It’s a good time for us to be doing this so we think it turned out quite well. We want to start finally trying different things when it comes to the printing  (uber special huge thanks to Mauz et co. at Monolith Press – always amazing professional work) of our work and this time we just experimented with size. It turned out to be a 16×40 inch print, satisfyingly displaying the detail we hope our work is infused with.

The piece is a collaboration between me and Kon. I initiated the piece with the lettering and the top part of the design including the upper part of the border, after which Kon completed the other part of the design along with the lower border. We notice our styles are easier to mesh between as time goes by and we seek to experiment with this even more in the future – strange as now we are an ocean apart due to socioeconomic whateverness.

The idea revolves around High on Fire’s album ‘De Vermis Mysteriis’ concept. Matt Pike has explained and elaborated on the concept on various interviews – suffice to say it is a mixture of Robert E. Howard, weed, Christ and Alchemy amongst other things and revolves around the twin brother of Christ named Leao who is essentially a time traveller – we get to see him psychedelically manifesting in weird situations via a serum extracted from Black Lotus (present in the lower part of the piece). One situation involves him being forced  by a weed woman shaman-esque form to sacrifice an infant, parallelizing the fertilisation of marijuana plants (check ‘Fertile Green’ for more). This along with time travel, the Stygians (the Snake) and Vanirs (the beheading) form the visual concept of our poster.

We rarely talk about this stuff, so I’ll stop now – here’s the final result.

…which leads us to our first poster for 2013. We were asked to do a poster for the Nashville stop of Graveyard’s ’13 US Tour and of course we obliged. Again, we wanted to try something different. More on the ideas behind this when it gets printed in the next few days. Monolith Press will be handling printing duties. 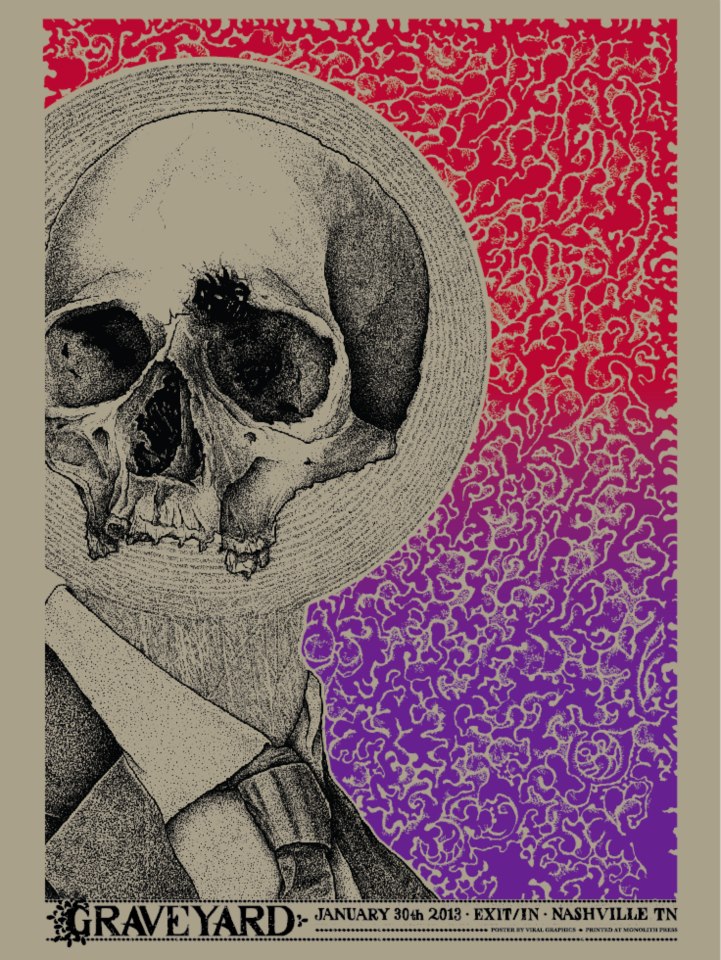 The Hof poster if available now here, and the Graveyard  will be available on February 1st through the same location. Once I manage to send some copies to Europe they will be available there too. Still, contact us at Viral if you need ’em!